Commentary Mailbag Links Archives About This Site Contact Us

Frank Loveland has spent the last twenty- five years studying Carlisle & Finch and has published many articles on C&F based on his examination of their records and other sources of information. Here are some of Frank's most recent thoughts on this fascinating manufacturer of early tinplate toy trains. - Ed. 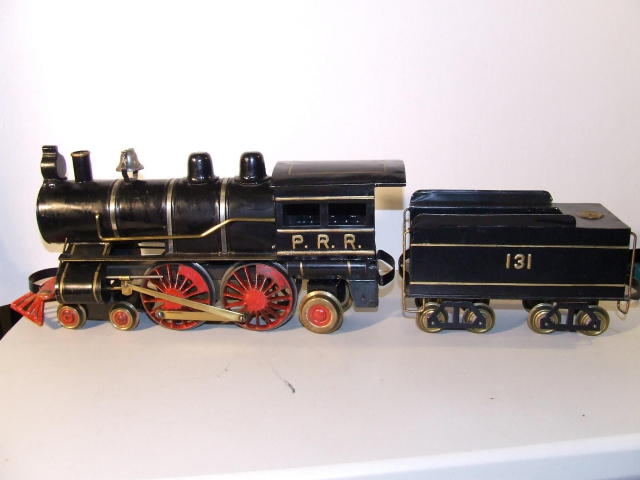 1. In terms of starting dates for the American manufacturers of electric toy trains, while Jehu Garlick came first with 200 Electric Tunnel Locomotives in 1895, C&F was right after him in September of 1896, with their very successful number one small brass trolley, followed by Lionel 2 and 7/8 inch in 1901 and KENCO or Knapp in 1902. The lesser known Smith & White from Cincinnati offered a Japanned trolley between 1901 and 1902 that was modeled after the C&F number one. In 1904 I believe Howard began to manufacture electric toy trains based on the find of a second earlier catalogue. We know the least about Howard and without the Louis Hertz articles and the Joe Guzzo finds we would know very little. Manes Fuld started experimenting with trains for his son and brought out a line of Voltamp trains in 1907, the year of their first catalogue with a toy electric train.

2. With regard to C&F, the company began in July of 1893 and was originally a repair shop for electric motors. Morton Carlisle and Robert S. Finch purchased it from General Electric and started operating on January 1, 1894 and C&F was incorporated in 1897 as a manufacturing company. The early job orders were for fixing electrical motors for GE and other customers. But in 1896 they decided to try making a product, an electric novelty - a small number one trolley. The first 500 were built by September 15, 1896. There is a tremendous debate about these early trolleys among collectors as advertisements showed them running on three rail track yet we have never found one that does. They made a second separate run of 1000 of these trolleys in the holiday season of 1896. I speculate that they must have shown promise in the holiday season of 1896 since they made a second run. This second group appears to have run on two rails rather than three. Most of the trolleys were made out of brass and had roofs that were painted black. All of these early trolleys are made with large paper labels that were glued on the entire side and ends of the trolley. Sometimes the windows were cut out and sometimes they were covered over in this version. Another variant of the number one trolley had smaller labels that had block lettering and then there was the familiar version with the small labels “Electric Railway” on each side These early trolleys had two pole motors and no reversing unit. Another group of these number one trolleys (3000 or so) were made in the Spring of 1897 which indicates it was very successful as an entry piece for C&F.

3. There was no catalogue issued in 1896. In 1897 the first catalogue was printed and a catalogue came out every year (except 1910) until 1915. They reused the engravings of their trains each year and when there were major changes, made up new cuts for the item. As the line expanded during the next three years, successively larger versions of "Catalogue B" were printed showing the new trains, trolleys and rolling stock as well the incline railway toy, and a boat, neither of which as of this date have been seen but do reportedly exist, and the automobile toy, of which at least one example is known and can be seen in Gottshalk’s book on toy automobiles, etc. Recently, a four page C&F brochure turned up dated 1908. Also, I located two instruction sheets from 1902-03 along with trains and we should not forget the familiar 1906 C&F Miniature Electric Railways handbook that was widely circulated at the time judging by the number of copies that have been found.

4. Regarding the searchlights, motors and electrical generators and dynamos manufactured by C&F, these gradually appeared in 1897. As these were not the focus of my research, I can only say that the first experimentation with searchlight manufacture occurred in 1895 and searchlights began to be produced in earnest in 1897. Eventually searchlights had their own separate catalogue, "Catalogue A." Gradually searchlights became of the main focus of the business because of C&F contracts with US and other governments. At this point C&F no longer relied on toys and trains as their main source of income but focused on searchlights as their future.

5. In 1900 the Carlisle and Finch Company left behind its location on 6th St. and moved to East Clifton Ave. in Uptown Cincinnati to upgrade their manufacturing facilities. Many of the pictures that you see of the employees working at the plant were taken in this building. It was their home for the next 47 years until they moved to their current factory at 4562 W. Mitchell Ave. Brent Finch, the current president, used to listen to his grandfather reminisce about the days when they made trains and the location where they assembled and painted them. My favorite colors, C&F orange and blue and steel side frames with brass wheels are often indicative of the later C&F trains. The earlier trains had cast iron wheels nailed into green-stained wood bolsters with green floors for the cars. They continued to manufacture trains at the East Clifton address until 1914 and possibly as late as 1916. By this time Marine searchlights and government contracts from all over the world not just the US and became the focus of their business.

6. And what about the Carlisle of C&F? His first name was Morton. He and Finch were friends and I was overwhelmed by all the historical material that Carlisle and Finch had. However, I was not able to find out what role he played in the company. A business card for Carlisle indicates that he was president of Clifton motors, a branch of C&F that made all kinds of engines, but this may have been more honorary in nature than anything else. Morton's name does not appear much in the C&F records I studied. I do know he held some of the stock in the company and that he sold his stock back to Mr. Finch in 1926. In a letter written by Don McLain to Herb Morley, McClain said after he read that Carlisle died Don went around to the rooms where he had lived to get his effects and the landlady said she had thrown them all out. We have very little information about Morton Carlisle and that should be looked into in future C&F studies. I am still looking for a photo of him but I do have a picture which may include Carlisle .

7. There are three main periods of C&F development based on my research. The Early period started in 1896 and lasted until 1903. During this period brass was used to fabricate many items, with cast iron wheels attached to wood bolsters by nails. This period saw the use of link and pin coupler connected by iron staples. The second period begins in late 1903 when they switched over to bumper band couplers and the manufacture of an expanded line with a variety of rolling stock, both small and large. This period also marked the appearance of the No. 45 loco as well as the large No. 2 interurban, the creative No. 53 derrick car, and the No. 87 passenger car. By 1907-1908, they move into a third period. This period sees the emergence of the medium size No. 34 nickel loco and a different style of No. 45 loco, medium instead of large freight cars, and passenger cars with brass instead of cast iron wheels. Then in 1915 comes the end with no more changes and an attempt to sell off old stock. These dates are not fixed but I think it helps us conceptually to get a handle on C&F.

Rather than bombard you with lots of dates and product numbers here which can be be boring, I refer you to the first section on C&F in Greenburg's Guide to Early American Toy Trains which was written by W.G.Claytor Jr.

8. C & F had an agent system of distribution of toy trains and trolleys. They would ship inventory to their agents who would sell them to the public. Ohio Electric Works was one on their best customers and issued C&F catalogues with their own name on them. C&F also did a direct mail order sale and repair business. It not clear when this system ended for the toys and trains.

9. Repairs were a problem as there were very few service stations for C&F repairs in these times. I assume both the agents and factory handled those repairs that could not be handled by the customer but we really don't know. Ohio Electric in Cleveland must have done some repairs as they were an important retailer for C&F. We know Don McClain fixed C&F trains in his repair shop in downtown Cincinnati and also acquired many the fine C&F handmade samples from employees of C&F and later sold them to collectors.

10.It is apparent that C&F and later Howard developed the concept of an outfit which included the trains or trolleys, track, and a station and/or bridges so that you could set up a layout right out of the box. It is my belief that C&F and Howard were linked in some ways but we still have not discovered how. Lionel and Knapp did not have such outfits available in the early days. They sold their trains without dictating what cars had to go in a set like the Germans did. Then customers could come back and add on pieces later. Voltamp had sets but not outfits.

11. C&F attempted to resurrect their train line in the 1930s making some C&F cast aluminum trains and a streamliner but they were not successful. I had the opportunity to see pictures of and examine some of these handmade samples and found out they were very different than the earlier tinplate production.

12. In closing I want to make the point that you really never are done studying a train manufacturer. Within the past year many new items and pieces of information have come to light, e.g., the Mc Clain files, the 4 page 1908 C&F brochure, the Howard boxcar with a C&F base and early trucks, more information about Morton Carlisle, and so forth. The story of Carlisle and Finch continues to unfold.